From SnowRunner & MudRunner Wiki
Jump to navigation Jump to search
This page is a translated version of the page MudRunner and the translation is 100% complete.
Other languages:
English • ‎русский 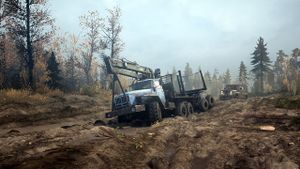 MudRunner — is the coolest version of the cult game Spintires, which has sold a million copies. The game was released on PC, Xbox One, PS4 and Nintendo Switch. As in Spintires , MudRunner offers players to sit behind the wheel of an SUV and ride on the extreme Siberian off-road with only a map and compass!

Unlike its predecessor, this edition includes a new sandbox map in addition to the 5 zones of the original game, a complete redesign of the graphics, a new "Challenge" mode with 9 new maps, 13 new off-road vehicles and other significant improvements. This is not just an extended edition, it is a full-fledged off-road simulator!

The game was created for the contest Havok Physics Innovation Contest by Intel that took place in 2008 . Participants were encouraged to use the products Havok Physics (software) and Havok Animation. Initially, it was a fairly simple Demo created by PaveHavok, but was warmly received by the community, which contributed to the further development of the project into a full-fledged game. The game originates on the notorious Kickstarter - that's when the gaming community drew attention to Spintires. Since the first training camp, the game has changed significantly, acquired additional features and acquired a considerable army of fans doing for her Modification. Moreover, in the final version appeared multiplayer mode.

Drive powerful all-wheel drive cars in extreme open level environments! Overcome off-road, rough rivers and other obstacles on the way to your goals. Your only allies are the map, the compass and the art of driving. Go on the road alone or in co-op mode, supporting up to 4 players.

You will have 19 powerful SUVs to choose from, each with its own characteristics and mounting equipment. All cars are designed to drive in the most extreme conditions, but they are only a tool in your hands: the key to success in the missions will be your driving skills!